Honoring Their Sacrifice With Our Service

Just A Bad Day At Work: A Champion’s Mindset

When most of us think about having a bad day at work, we think about the days that our bosses yelled at us, getting slammed with a huge project that has an immediate deadline, or maybe even a spur of the moment meeting that you were unprepared for. Could you imagine if your bad day at work resulted in the loss of your left leg, half of your right thigh and a few fingers? Those were the repercussions of Derick Carver’s “bad day at work”.

Derick grew up in Southern California and attended Eastern Michigan University before he commissioned as an officer in the U.S. Army. He always knew that he wanted to be in the Army. He remembers back to elementary school when he was given the assignment to draw a picture of what he wanted to be when he grew up, and he drew himself as an Army Ranger with all of the gory details included. Years later he joined the Army and became an Army Ranger school graduate, but it wasn’t easy.

Derick recalls the day he graduated from Army Ranger school as one of his favorite memories of being in the military. Going to this school and training was no joke; he talked to us about how difficult and stressful this training process was, not only mentally, but physically as well. Immediately following his graduation, Derick remembers “walking down the baking aisle in the commissary and smelling all of the sugar and I hadn’t had anything sweet in months and literally grabbed a chocolate icing container off of the shelves and ate it with my fingers”. From there he stuffed his face and slept for four days straight before getting back to work.

After recalling such a funny memory, Derick shed some light on what he considers “just a bad day at work”, a day that changed the course of life for him, forever. Derick was serving as a platoon leader in the 82nd Airborne on a deployment in Afghanistan. On January 19th of 2010, his platoon was attacked while conducting a dismounted patrol just outside of Kandahar, Afghanistan. He got blown up by an IED, but the world around him never froze or went blank. In fact, he remembers counting the flips his body made in the air after the explosion. As crazy as it sounds, Derick never once lost consciousness and called in his own injury and the attack. After the initial attack, he began to assess the damage both surrounding him, and that he suffered. He looked down and saw that some of his fingers were detached, he noticed his elbow popping out, and then he looked down at his legs. He attempted to move them and the right leg responded while his left didn’t. It wasn’t attached. He reached down to grab what had once been his left leg, “I couldn’t just leave it there”.

Instead of being devastated and reacting negatively to the situation, Derick continued to stay positive and crack jokes to keep his men pushing forward as best as they could. Nine of Derick’s men, including him, were wounded and two were killed during that attack. As a strong leader, he refused care in order to make sure that his men were getting treated first. He let two medevacs leave before he got in the third. He explained how it felt while he waited and fought to stay alive, “I kept telling myself ‘take deep breaths, control your heart rate, don’t panic, don’t die like an [expletive] in front of the men’ over and over again to stay alive”. He explained that in this situation where he felt himself bleeding out and dying, his training kicked in and he did exactly be was necessary to keep himself conscious.

“I was proud to watch my soldiers do exactly what they trained for and what they needed to do to stay alive and to keep others alive”.

We asked Derick what his most defining moment in the military was, and we were slightly shocked by the answer. We felt it was safe to assume that January 19th of 2010 was his most defining moment; when his platoon was attacked and he showed his unbreakable determination and leadership. But, that was not his answer. May 29, 2012, was the most defining moment. That was the day he retired from the U.S. Army. Serving his country allows him to be proud. Being a veteran and a Purple Heart recipient allows him to feel as though he served his purpose. Though he explained that you never want to win a Purple Heart, it solidified his purpose, and “it comes with the job.”

As a veteran, Derick is able to do what he can to help others that are like him. He works with many nonprofits that assist veterans. He is extremely dedicated and passionate about helping to advocate for in vitro fertilization for veterans, as his injuries from the IED explosion resulted in traumatic damage to his reproductive organs.

When we spoke with Derick he was most passionate when answering the question “what is something you wish that the public knew about the veteran community?” He wishes that everyone could understand and distinguish the difference between Post Traumatic Stress Disorder (PTSD) and Posttraumatic Growth (PTG). The situations that our military men and women are put in do not have to result in negative consequences and hardships. He wants there to be a change in the narrative and the ability to re-educate not only the public but also our military members and veterans. These men and women go through intense and demanding training processes to fight and serve this country, but they are not trained to adjust back to civilian life after the fact. This lack of understanding leads to our heroes coming home and getting thrown right back into the swing of things, and that is the problem. There is no transition period developed to help the adjustment from the life they knew, filled with specific rules, regulations, and structure back to a normal day-to-day. Rather than hoping that these brave men and women can find their “new normals,” they should be taught how to adjust back and be provided with resources that can help them succeed.

It would be hard to believe what Derick has done with his life since the day of that attack on January 19, 2010, unless you’ve got a chance to talk to him. He will never let the injuries he sustained that day define him or get in his way. He says “it was just a bad day, the minute you make it more than a bad day at work you are losing. You need to accept it, and you need to mean it.” It was a chance for him to adjust. He is the exact same as he was before his injuries “only now I weigh about 40 pounds less”. He competes worldwide in adaptive athlete CrossFit, powerlifting and Strongman competitions. He won Wodapalooza (CrossFit competition) in 2015, In 2016 Derick won the title as the U.S. and World’s Strongest Disabled Man. Due to an injury, he was unable to compete in the 2017 competition, but he has begun training and plans to compete in next years. There is nothing that he cannot accomplish. 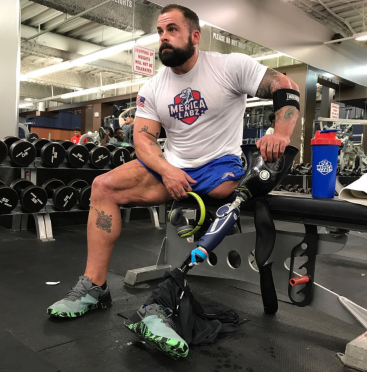 Derick’s mindset is one that can and should inspire people around the world and from all walks of life.  Your success and your happiness are not decided by your circumstances, but rather by your mindset. He believes in himself, constantly pushing to reach new goals. He does not waste time focusing on anything besides how he can be the best at what he sets out to accomplish.

Although Derick has been more than successful in overcoming every obstacle that he had faced as a result of his injuries, not all of our veterans are. He makes a very important point when he discusses how the narrative has to be changed regarding PTSD. The men and women who keep our country and freedoms protected deserve that and deserve our help and support. The Purple Heart Foundation is committed to helping every single man and woman who has served our country. It is our mission to help make the transition from the battlefield to the home front a smooth one. You can show your support for these brave men and women by making a one-time or monthly pledge to ensure that ALL of our veterans are able to get the support that they need and deserve.